You can read Part 1 which introduces the idea of free body force diagrams here.

Essentially the technique we will use is as follows:

Let’s consider a car travelling at a constant velocity of 20 miles per hour.

’20 m.p.h.’ is such an uncivilised unit so let’s use the FIFA system to change it into more civilised scientific S.I. units:

More strangely, point B on the car tyre is moving backwards at speed of 8.9 m/s due to the rotation of the wheel, as well as moving forwards at 8.9 m/s with the rest of the car. Point B is therefore momentarily stationary with respect to the ground.

The tyres can therefore ‘grip’ the road surface because the contact points on each tyre are stationary with respect to the road surface for the moment that they are in position B. If this was not the case, then the car would be difficult to control as it would be in a skid.

(Apologies for emphasising this point — I personally find it incredibly counterintuitive! Who says wheels are not technologically advanced!)

Forces on a tyre

Assuming the car in the diagram is a four wheel drive, the total force driving it forward would be 4 x 330 N = 1320 N. Since it is travelling at a constant speed, this means that there is zero resultant force (or total force). We can therefore infer that the total resistive force acting on the car is 1320 N.

It is can also be slightly disconcerting that the force driving the car forward is a frictional force because we usually speak of frictional forces having a tendency to ‘oppose motion’.

And then a step to the right…

It’s just a jump to the left

And then a step to the right

We can see how important friction is for taking a step forward in the above diagrams. Again, it is worth pointing out to students how much effort goes into designing the ‘tread’ on certain types of footwear so as to maximise the frictional force. On climbing boots, the ‘tread’ extends on to the upper surface of the boot for that very reason.

Let’s apply a similar analysis to the case of a person stepping off a boat that happens not be tied to the mooring.

The forces on the person and the boat will be equal in magnitude, but the acceleration will depend on the mass of each object from F = ma.

Since the boat (e.g. a rowing boat) is likely to have a smaller mass than the person, its acceleration to the left will be higher in magnitude than the acceleration of the person to the right — which will lead to the unfortunate consequence shown below.

The acceleration of the person and the boat happens only when the person and boat are in contact with each other, since this is the only time when there will be a resultant force in the horizontal direction.

The outcome, of course, is that the person falls in the water, which has been the subject of countless You’ve Been Framed clips.

In the next post, I will try to move beyond horizontal forces and take account of the normal reaction force when an object rests on both horizontal surfaces and inclined surfaces.

Why do so many students hold pernicious and persistent misconceptions about forces?

Partly, I think, because of the apparent clash between our intuitive, gut-level knowledge of real world physics. For example, a typical student might find the statement ‘If I push this box, it will stop moving shortly after I stop pushing because force is needed to move things‘ entirely unobjectionable; whilst in the theoretical, rarefied world of the physicist the statement ‘The box will keep moving at a constant velocity after I stop pushing it, unless it is acted on by a resultant force such as friction‘ would get a tick whereas the former would get a big angry X and and a darkly muttered comment about ‘bloody Aristotleans.’

After all, ‘pernicious’ is in the eye of the beholder. Physics teachers have to remember that they suffer mightily under the ‘curse of knowledge’ and have forgotten what it’s like to look at the world through anything than the lens of Newtonian mechanics.

We learn about the world through the power of example. Human beings are ‘inference engines’: we strive to make sense of the world by constructing general rules based on the examples presented to us.

OK, let’s address this. Is this better?

From both versions of this diagram shown above: we simply cannot tell.

As a consequence, I think the explanatory value of this diagram is limited.

Free Body Diagrams to the Rescue!

A free body diagram is simply one where we consider the forces on each object in the situation in turn.

We begin with a situation diagram. This shows the relationship between the objects we are considering. Next, we draw a free body diagram for each object; that is, we draw each object involved and consider the forces acting on it.

From version 3 of Force Diagram 1, we can see that it was an attempt to illustrate Newton’s Third Law i.e. that if body A exerts a force on body B then body B exerts an equal and opposite force on body A.

This is a bad force diagram because it is unclear which forces are acting on the cart and which are acting on the person. Apart from a very general ‘Well, 50 N minus 50 N means zero resultant force so zero acceleration’, there is not a lot of information that can be extracted from this diagram.

Also, the most likely mechanism to produce the red retarding force of 50 N is friction between the wheels of the cart and the ground (and note that since the cart is being pushed by an external body and the wheels are not powered like those of a car, the frictional force opposes the motion). Showing this force acting on the handle of the cart is not helpful, in my opinion.

The Newton 3 pairs are colour coded. For example, the orange 50 N forward force on the person (object A) is produced as a direct result of Newton’s 3rd Law because the person’s foot is using friction to grip the floor surface (object B) and push backwards on it (the orange arrow in the bottom diagram).

I’m not suggesting that all three free body diagrams always need to be discussed. For example, at KS3 the discussion might be limited at the teacher’s discretion to the top ‘Forces on Cart’ diagram as an example of Newton’s First Law in action. Or equally, the teacher may wish to extend the analysis to include the second and third diagrams, depending on their own judgement of their students’ understanding. The Key Stage ticks and crosses on the diagram are indicative suggestions only.

At KS3 and KS4, there is not a pressing need to explicitly label this technique as ‘free body force diagrams’. Instead, what I suggest (perhaps after drawing the situation diagram without any force arrows on it) is the simple statement that ‘OK, let’s look at the forces acting on just the cart’ before drawing the top diagram. Further diagrams can be introduced with a similar statements such as ‘Next, let’s look at the forces acting on just the person’ and so on. Linking the diagrams with dotted lines as shown is, I think, useful in not losing sight of the fact that we are dealing piecemeal with a complex and nuanced whole.

The free body force diagram technique (whether or not the teacher decides to explicitly call it that) offers a useful tool that will allow us all to (fingers crossed!) draw better force diagrams.

In the next post, I hope to show how the technique can be used to explain common problems such as how a car tyre interacts with the ground to drive a car forward.

You can read Part 2 here.

There are three things that everyone should know about simple harmonic motion (SHM).

There, my work here is done. H’mmm — it looks like this physics teaching lark is much easier than is generally acknowledged…

[The above joke courtesy of the excellent Blackadder 2 (1986), of course.]

In my opinion, the misconceptions which hamper students’ attempts to understand simple harmonic motion are:

All of these misconceptions can, I believe, be helpfully addressed by using a form of dual coding which I outlined in a previous post. 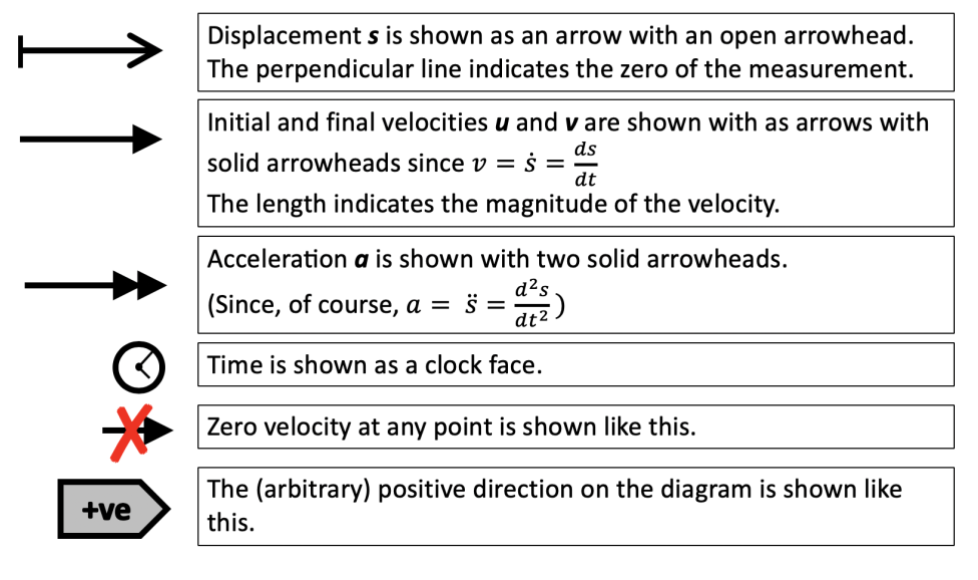 The discussion context which I present is that of a rather strange episode of the motoring programme Top Gear. You have been given the opportunity to win the car of your dreams if — and only if — you can drive it so that it performs SHM (simple harmonic motion) with a period of 30 seconds and an amplitude of 120 m.

All physics teachers, to a greater or lesser degree, labour under the ‘curse of knowledge’. What we think is ‘obvious’ is not always so obvious to the learner. There is an egregiously underappreciated value in making our implicit assumptions and thinking explicit, and I think diagrams like the above are invaluable in this process.

But what is this SHM (of which you speak of so knowledgeably) anyway?

Let’s look at this definition in terms of our fanciful Top Gear challenge. More to the point, let’s look at the situation when t = 0 s:

Questions that could be discussed here:

Hands up who thinks the time on the second clock on the diagram above should read 3.75 seconds? It makes sense, doesn’t it? It takes 7.5 s to reach C (one quarter of an oscillation) so the temptation to ‘split the difference’ is nigh on irresistible — except that it would be wrong — and I must confess, it took several revisions of this post before I spotted this error myself (!).

The vehicle is accelerating, so it does not cover equal distances in equal times. It takes longer to travel from A to B than B to C on this part of the journey because the vehicle is gaining speed.

So we can redraw the diagram as follows:

Some further questions that could be asked are:

Next, we move on to this diagram and ask students to use their knowledge of SHM to decide the values of the question marks on the diagram.

Which hopefully should lead to a diagram like the one below, and realisation that at this point, the driver’s foot should be entirely off the gas pedal.

And thence to this:

One of the most salient points to highlight in the above diagram is the question: how could you operate the car controls at this point? The answer is of course, that you would be pressing the foot brake pedal to achieve a medium magnitude deceleration. This is often a point of confusion for students: how can a positive acceleration produce a decrease in the magnitude of the velocity? Hopefully, the dual coding convention suggested in this blog post will make this clearer to students.

Over time, we can build up a picture of a complete cycle of SHM, such as the one show below. This shows the car reversing backwards at t = 25 s while the driver gradually increases the pressure on the brake.

From this, it should be easier to relate the results above to graphs of SHM: 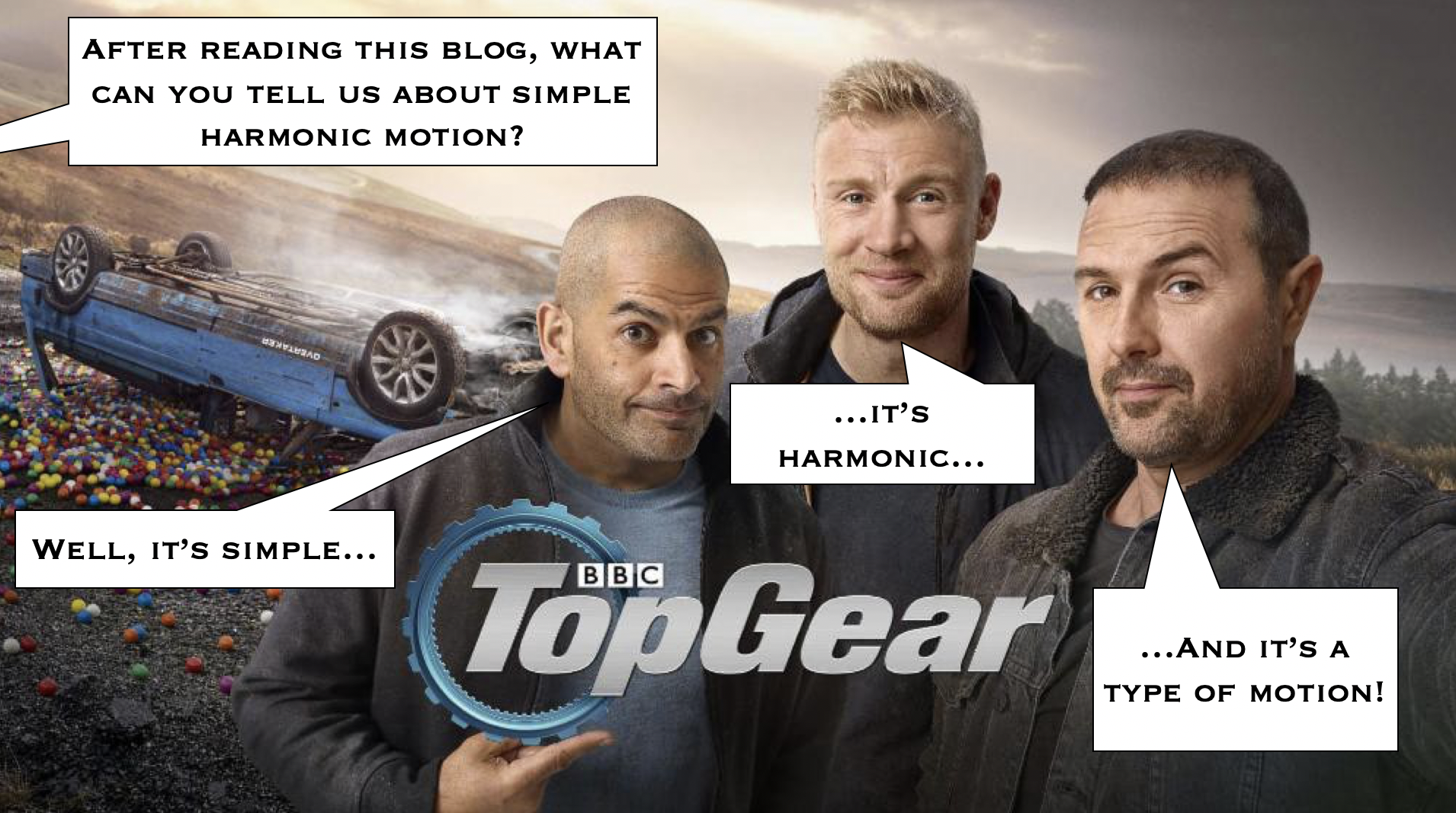 So there you have it: JOB DONE!