There are three things that everyone should know about simple harmonic motion (SHM).

There, my work here is done. H’mmm — it looks like this physics teaching lark is much easier than is generally acknowledged…

[The above joke courtesy of the excellent Blackadder 2 (1986), of course.]

In my opinion, the misconceptions which hamper students’ attempts to understand simple harmonic motion are:

All of these misconceptions can, I believe, be helpfully addressed by using a form of dual coding which I outlined in a previous post.

The discussion context which I present is that of a rather strange episode of the motoring programme Top Gear. You have been given the opportunity to win the car of your dreams if — and only if — you can drive it so that it performs SHM (simple harmonic motion) with a period of 30 seconds and an amplitude of 120 m.

All physics teachers, to a greater or lesser degree, labour under the ‘curse of knowledge’. What we think is ‘obvious’ is not always so obvious to the learner. There is an egregiously underappreciated value in making our implicit assumptions and thinking explicit, and I think diagrams like the above are invaluable in this process.

But what is this SHM (of which you speak of so knowledgeably) anyway?

Let’s look at this definition in terms of our fanciful Top Gear challenge. More to the point, let’s look at the situation when t = 0 s:

Questions that could be discussed here:

Hands up who thinks the time on the second clock on the diagram above should read 3.75 seconds? It makes sense, doesn’t it? It takes 7.5 s to reach C (one quarter of an oscillation) so the temptation to ‘split the difference’ is nigh on irresistible — except that it would be wrong — and I must confess, it took several revisions of this post before I spotted this error myself (!).

The vehicle is accelerating, so it does not cover equal distances in equal times. It takes longer to travel from A to B than B to C on this part of the journey because the vehicle is gaining speed.

So we can redraw the diagram as follows:

Some further questions that could be asked are:

Next, we move on to this diagram and ask students to use their knowledge of SHM to decide the values of the question marks on the diagram.

Which hopefully should lead to a diagram like the one below, and realisation that at this point, the driver’s foot should be entirely off the gas pedal.

And thence to this:

One of the most salient points to highlight in the above diagram is the question: how could you operate the car controls at this point? The answer is of course, that you would be pressing the foot brake pedal to achieve a medium magnitude deceleration. This is often a point of confusion for students: how can a positive acceleration produce a decrease in the magnitude of the velocity? Hopefully, the dual coding convention suggested in this blog post will make this clearer to students.

Over time, we can build up a picture of a complete cycle of SHM, such as the one show below. This shows the car reversing backwards at t = 25 s while the driver gradually increases the pressure on the brake.

From this, it should be easier to relate the results above to graphs of SHM: 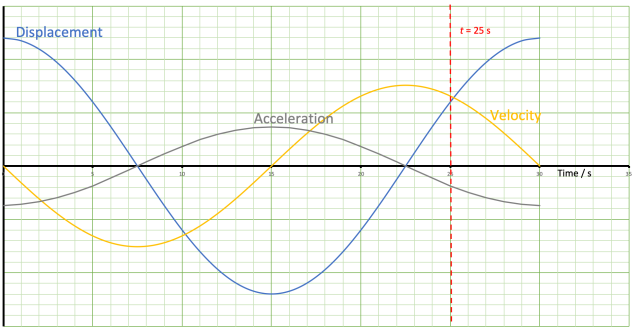 So there you have it: JOB DONE!

2 thoughts on “SHM and the Top Gear Challenge”