Has a school physics experiment or demonstration ever changed the course of human history?

On 21 April 1820, one such demonstration most definitely did. According to physics lore, Hans Christian Øersted was attempting to demonstrate to his students that, according to the scientific understanding of the day, there was in fact no connection between magnetism and electricity.

To this laudable end, he placed a compass needle near to a wire to show that when the current was switched on, the needle would not be affected.

Except that it was affected. Frequently. Each and every time Øersted switched on the electric current, the needle was deflected from pointing North.

Everybody has heard that wise old saw that ‘If it doesn’t work, it’s physics…” except that in this case ‘It did actually work as it was supposed to but in an unexpected way due to a hitherto-unknown-completely-new-branch-of-physics.’

Øersted, to his eternal credit, did not let it lie there and was a pioneer of the new science of electromagnetism.

Let’s consider two long, straight conductors placed parallel to each other as shown. 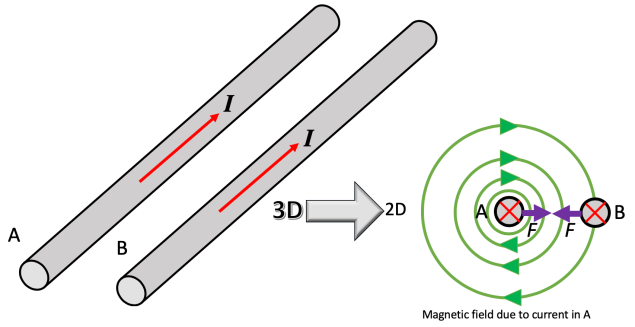 In the diagram above, the magnetic field produced by the current in A is shown by the green lines. Applying Fleming’s Left Hand Rule* to conductor B, we find that a force is produced on B which acts towards conductor A. We could go through a similar process to find the force acting on B, but it’s far easier to apply Newton’s Third Law instead: if body A exerts a force on body B, then body B exerts an equal and opposite force on body A. Hence, conductor A experiences a force which pulls it towards conductor B.

In the past, this phenomenon was used to define the ampere as the unit of current: ‘The ampere is that constant current which, if maintained in two straight parallel conductors of infinite length, of negligible circular cross-section, and placed 1 m apart in vacuum, would produce between these conductors a force equal to 2×10−7 newton per metre of length.‘ However, the 2019 redefinition of the SI system has ditched this and adopted a new definition in terms of the transfer of the elementary charge, e.

In what follows, we’re going to apply Einstein’s analysis to the situation of two long, straight current-carrying conductors. Acknowledgment: I’m going to following a line of argument laid out in Beiser 1988: 19-22.

It’s gotta be perfect (or ‘idealised’, if you prefer)

Let’s consider two idealised conductors A and B both at rest in the inertial reference frame of the laboratory. The flow of charge in both conductors is made up of positive and negative charge carriers moving in opposite directions with a speed v.

Magnetism? THERE IS NO MAGNETISM!!!!

So what we normally think of as a ‘magnetic’ force in the inertial frame of the laboratory can be explained as a consequence of special relativity altering the charge densities in conductors. Although we have just considered a special case, all magnetic phenomena can be interpreted on the basis of Coulomb’s Law, charge invariance** and special relativity.

For the interested reader, Duffin (1980: 388-390) offers a quantitative analysis where he uses a similar argument to derive the expression for the magnetic field due to a long straight conductor.

Update: I’m also indebted to @sbdugdale who points out the there’s a good treatment of this in the Feynman Lectures on Physics, section 13.6.

* Although you could use a non-FLHR catapult field analysis, of course

** ‘A current-carrying conductor that is electrically neutral in one frame of reference might not be neutral in another frame. How can this observation be reconciled with charge invariance? The answer is that we must consider the entire circuit of which the conductor is a part. Because a circuit must be closed for a current to occur in it, for every current element in one direction that a moving observer find to have, say, a positive charge, there must be another current element in the opposite direction which the same observer finds to have a negative charge. Hence, magnetic forces always act between different parts of the same circuit, even though the circuit as a whole appears electrically neutral to all observers.’ Beiser 1988: 21

4 thoughts on “Magnetism? THERE IS NO MAGNETISM!!!!”